This website uses cookies to personalize (News-System, Diskussion board, Photo gallery, Poll, where e.g. your login could be stored or your at the Poll-System your vote is stored) therefore you will be asked at this point if we want to set a cookie. Also it could happen that included external content like Youtube, Facebook, Soundcloud, Bandcamp or others uses cookies for personalize, advertising other others. We'll pervent this by Java-Script until you accept the conditions by clicking on the mentioned external content.
If you use our website you accept the conditions.
✖

London, 24 bands, 3 locations, 1 day, black and death metal, Mayhem vs. Asphyx, Septic Flesh vs. Benediction – this is Incineration Fest.
But can such an event work in such a busy and turbulent capital city? The answer is absolutely yes and the festival was sold out.


The festival was held in Camden, North London across three different venues. The Underworld, Electric Ballroom and the Black Heart. Luckily it was just a maximum 5 minutes’ walk to move from one venue to another. Tickets costs as early bird deal 43£ [~48€) or 54£ (~61€) later at the regualar presale.

The shows began at 13:20 with the local death metal band Sphinx.
For us the day started at the Black Heart, where we exchanged our tickets for the festival wristband. After a round of Metallica beer from the bar, we headed over to our first chosen gig to the Underworld.

Where Unholy Lust from the US were playing.
The boys from Los Angeles play really fierce death/thrash, which was really good. Somehow the material reminded me of Sadistic Intent and the band, with their massive black long hair and South American look bore a really strong resemblance to the American Legends. A great start for the festival for us!

After this, we stayed at The Electric Ballroom for Norwegian black metal band Carpathian Forest. The black metal of the band actually contains a lot of rock, nearly pop attitude. Singer Nattefrost was wearing a priest costume and was making a lot of action on stage. For one of the songs, the band presented Kvarforth from Shining on stage to do the vocals. On the set list of the evening, the song “Knokkelmann” couldn’t be missed and as always was really great. All in all, a good gig of the band, though I missed a bit of the real black metal attitude of Carpathian Forest.

Now it time to head on straight away to the Underworld, because I didn’t want to miss a minute of the show from my personal favourite, the Australian black metallers Advent Sorrow. Here I was really keen on seeing how good the great material of the band is performed live on stage. And it was amazing. All band members were wearing corpse paint and were highly motivated. From the first song on, the band slammed, with enormous heavy sound, their depressive melodic black metal from the small stage.
Singer Rhys King presented the hate and despair both visually and vocally in an incredibly authentic manner. As he spat through his lyrics, he was highly animated punching and kicking the air whilst committing his every breath to his spiteful vocals. For six people the stage was quite small, and the keyboarder with his skull corpse paint was staying in the middle and was looking cool and dark to the audience. Btw. the venue was jam-packed and the audience was excessively celebrating the gig. With them just playing songs from their two great albums “As All Light Leaves Her” and “Kali Yuga Crown”. The band from Perth with their symphonic / depressive black metal played a really intense set and for me it was one of the best I have seen in a long time. After the show we met the guys at the merch stand who were happy to chat to the crowd and were really great guys.
The set list was as follows: Verminblood, With Storming Death, The Agony Courses Through My Veins, Wolf & Weapon, Absolute Perpetual Death, Skin to Suffer In, Pestilence Shall Come, While Bones Are Broken.


Now the question was: Septic Flesh or Benediction? I choose Benediction, even though I have seen them many times before, and it was a good decision. The British band were playing at the Underworld and had an enormously loud but good sound. Apparently, the band likes to play in their homeland and you could see and hear their joy whilst play. With that brutal and heavy sound, the groovy death metal of Benediction was killer. The band had a lot of fun and lampooned themselves with statements like “Today the parents of our (young) bassist [Dan Bate] are within the audience and they look younger than our guitar player [and looks to Darren Brooks]”.Again and again, the band demanded a circle pit and the audience was going crazy, both stage diving and also providing the band with a circle pit around the pillar in front of the stage.
The vocals of Singer Dave Hunt were really on form today sounded really and he also seemed to be in a really good mood. Before the last song, Dave Hunt stated (what was reveled earlier), that this was his last show with Benediction in England and he’s just playing a few show in Europe, before he’ll leave the band after 21 years. He gave props to the fans and band and also became overcome with emotion, shedding a few tears and losing his voice. He’ll now concentrate his energy for his other band Anaal Nathrakh. This was a really great show from Benediction, and we enjoyed it very much.

After Benediction the Underworld emptied with many people heading to the Electric Ballroom to see headliners Mayhem. We also followed to see a few songs of the Norwegian black Metal legend. Since the demeanour and posturing of Mayhem is not my cup of tea, it was the plan after the first songs to move to the Underworld to see Asphyx as headliner there. Mayhem began much later than planned which was a pity. The venue was densely packed with many eagerly awaiting the spectacle. The Norwegian’s began with a lot of fog, very long intro and covered in blue light. Rattling, chinking, frosty and their black metal scraped the ears.

So, we moved again back to the Underworld to pay one’s respect to Asphyx. And surprisingly we realized that the venue was only half filled with fans. This didn’t disturb the death doom legends from the Netherlands, and they began furious as usual. I felt that songs like “Deathhammer” were played faster than on the album. And this was later confirmed by guitar player Paul Baayens as we had a beer together in The Worlds End pub which is above the venue. The sound was unbelievable loud so it hurt my ears after some time. In meantime the venue filled more and more.
During “Scorbutics” the fans started to stage dive, which continued until the end of the gig. The last two songs of the night were “The Rack” and “Last One on Earth” and they were played now in front of a full house. As usual a great gig of Asphyx ended the shows in the Underworld leaving behind a venue full of smiling and happy faces.

After this we moved to the Black Heart, as Abysmal Torment from Malta were playing the last set of the festival at 22:00. Amongst an enormous scrum we climbed up the stairs to the small venue. Where the less well known and more underground bands were playing. Sadly, the location was massively overcrowded, and as such we couldn’t make it in from of the stage. So, we left the venue and Incineration Fest 2019 for us was finished.

We all came together again and moved from one to the next metal pub. In the meantime we met Martin, Paul and Alwin from Asphyx at Worlds End and had some schnapps and beer together. At around 03:00 the great metal night in Camden came to an end and we make our way back to the accommodation via tube.

More about the Incineration fest you'll find at the festival- website.

39 photos of the event ...here
Comments and suggestions you can post at the discussion board

The last 4 news about the festival Incineration


The last 2 discussion board topics about the festival Incineration 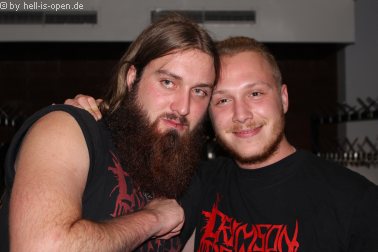